The 51 day self driving autumn travel notes of Yunnan, Guizhou and Sichuan in 2020 are divided into 10 parts 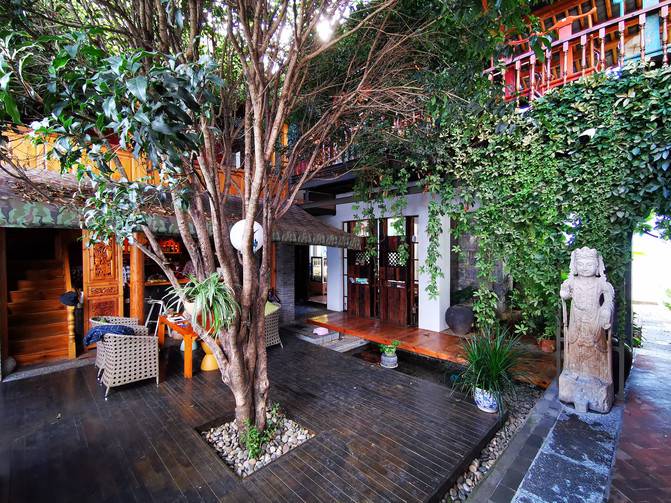 After checking in, I sit on the beach of the inn, facing the sea, drinking Yunnan coffee, watching the clouds roll and the waves roll until the sun sets, and then go out for dinner 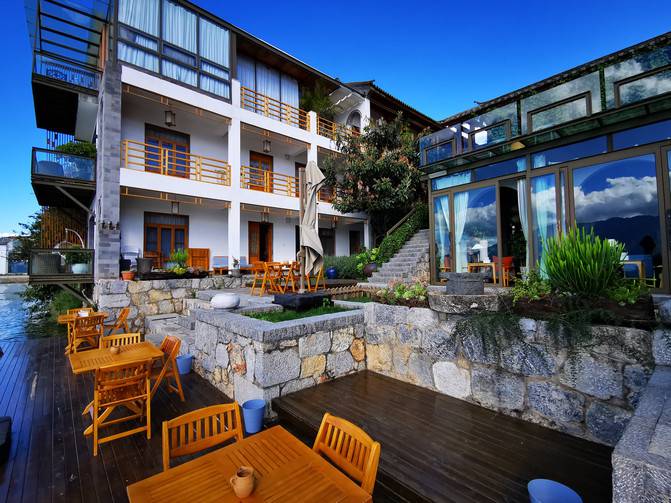 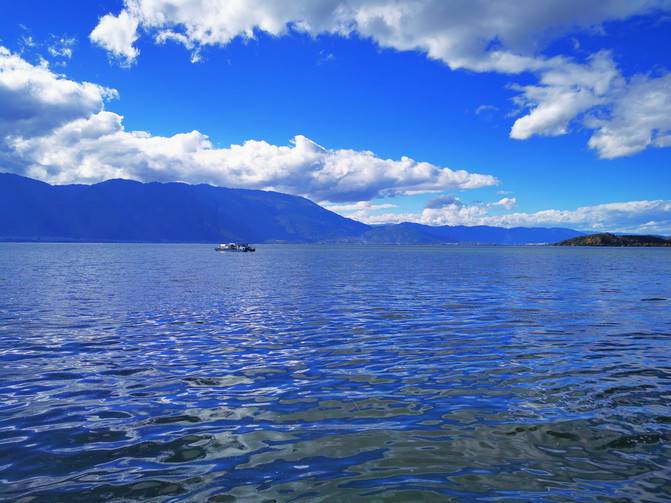 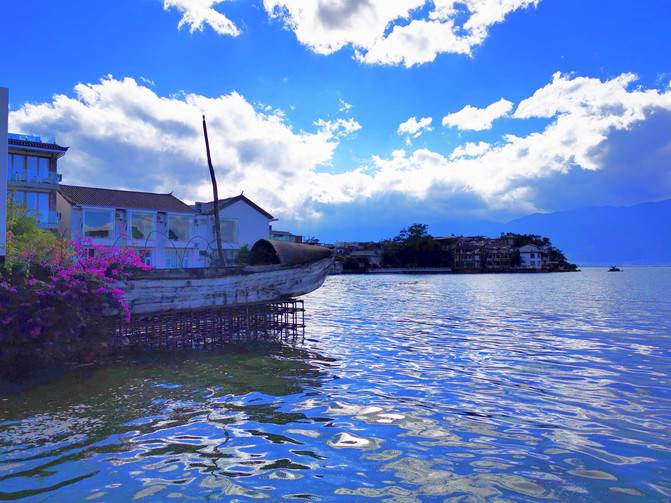 After eating fish hot pot for dinner, you can resume drinking

Full of wine and food, go to see the night of the ancient town:

Breakfast in the hotel:

The second time to play, a crooked neck tree under a pool of spring. A place famous for the movie "five golden flowers".

The market at the exit made everyone go around eight or nine times. It's really disgusting. In the scenic area, there are a lot of people who rent Bai nationality's clothes, take photos, and buy food.

Brother Peng and Jinhua have a deep friendship

The tower is an even number, which means that men and women are equal.

Live in the old city of Dali, Vienna. In case of power failure at night, fortunately the hotel generates electricity.

For the second time.

There are too many people in Dali, more than Lijiang.

Outside the ancient city:

One tower (Hongsheng temple, not open).

From Xiaguan to Weishan County.

The birthplace of the ancient Nanzhao Kingdom 1300 years ago was built in 1389, the 22nd year of Hongwu in Ming Dynasty. The ancient city maintains the chessboard pattern of more than 600 years ago. It is a well preserved ancient architectural complex of Ming and Qing Dynasties in China.

Weishan County is not on the main road, less tourists, more original.

One of the 14 famous Taoist mountains in China, there are nearly 20 Taoist temples, most of which are built in the early Qing Dynasty, with a simple atmosphere. This is also the birthplace of Nanzhao. The altitude is 2230 meters.

We only visited the Yuhuangge area, where nearly half of the Taoist temples are concentrated, about 20 minutes from the gate.

It seems that there are only two tourists, I met less than 20 on the way. It's a quiet fairy mountain with constant bird calls.

After asking the Taoist, "the stone contains green" has been put away for protection“ The "Laojun meditation stone" and "Laojun support stone" are not in the temple. They have been looking around outside the temple, but they have not been found.

There are 10 murals above the head of Laojun in the main hall.

It's very dark in the main hall. Most people can't find it. You need Huawei's night view mode to make it.

I went to Changchun cave. After a long walk, I went back.

Chuxiong is a peaceful and quiet city between Kunming and Lijiang. There are not many scenic spots in the city. The famous Yuanmou tulin and Dinosaur Valley are all in the suburbs. It's embarrassing. But it is said that the house price here is only over 5000.

Chuxiong Museum, 4A: closed on Monday

Ancient town of Yi people, 4A:

There are many stalls and few tourists. It's very quiet. I've been here for a while.

The ticket is 10 yuan. For the third time.

China's first long couplet, with 180 words, was written by sun ranweng, a famous Yunnan scholar in the Qing Dynasty. It summarizes the natural and historical landscape of Kunming.

When we arrived in Kunming, we saw the haze that we had not seen for many days, and the air quality was 90. Originally, I wanted to go to the West Mountain Longmen, standing on the cliff to see the Dianchi Lake, but I couldn't see it, so I had to avoid it.

The weather in Yunnan is cool in the morning and evening, very hot at noon, 20 degrees, and the hot sunshine seems to be in Guangdong.

Originally, I wanted to go to Xishuangbanna, which is a more heated place. Let's go at another suitable time.

Qiongzhu temple is 18 kilometers away from the urban area. From the west of Kunming to heilinpu, it turns to the hillside of Yuan mountain and hovers for 3 kilometers to reach Qiongzhu temple. The forest here is luxuriant and the flowing spring is murmuring. It used to belong to the "six sceneries of Yunnan Yang" and is known as the "jade case clear haze" in Central Yunnan.

The five hundred Arhats in the temple are of different shapes, with the same expressions of joy, anger, sadness and joy. Whether viewed from a distance or near, the proportions of the human body, the muscles and bones, and the clothing patterns of these Arhats are generally similar to those of ordinary people. The sculpture also uses a variety of techniques, such as hollowing out and round carving, to present the three-dimensional relationship between the human body and the atmosphere, and the collocation of utensils.

The mineral pigments used in the statues have a long history, and the gilding of the clothing is made of pure gold, with thin and beautiful patterns, sticky and hot stickers, which still shine today. In many famous temples in China, there are 500 clay statues of Arhats, among which the Arhats of Qiong temple have the highest artistic evaluation and are known as "the Pearl of Oriental Sculpture".

Five hundred Arhats of Qiongzhu temple are displayed on the two walls (68 statues), Tiantai laige (216 statues) and fanyin Ge (216 statues) of Daxiong hall, which are divided into upper, middle and lower floors. Most of the upper and lower layers are sitting images, and the middle layer is standing images. The statues are arranged symmetrically, such as the dragon on the left and the tiger on the right; Tengyun on the left, fog on the right, etc. These Arhats are in various forms, full of wit, varied in posture, and different in expression and posture. Clothes are different according to the characters' age, personality and environment. Although each of the five hundred Arhats has a wonderful appearance, they can be divided into two categories in terms of creative techniques.

Located in the northern suburb of Kunming. The ticket is 7.5 yuan.

There are three main features of shangxiaguan scenic spot

First, the water is extraordinary.

There are two deep and shallow pools in Heilongtan. There are stone fences around the two pools, with a narrow stone bridge in the middle; The stone railings were built in 1454 A.D. in the fourth year of the Ming Dynasty.

The deep pool is called Heilongtan, also known as qingshuitan. It is round and covers an area of 600 square meters. The spring water gushes out from the bottom of the pool, relatively clear, with the deepest depth of 15 meters. Shallow pool is located in the northeast of deep pool. The spring is slightly yellow, which is called muddy pool. It covers an area of 2600 square meters and has a water depth of 0.5 meters.

There are two miraculous differences in Heilongtan: the clear and the muddy pools are only a few steps apart, but the water color is very different. One is clear, one is muddy, one is deep and one is shallow, which is like the "Taiji diagram" of Taoist Yin and Yang; The two springs are connected with each other, but the fish do not cross each other's pool, forming a strange spectacle of "two waters intersect, fish do not come and go", which attracts tourists to sigh and inquire about the difference, but in the end: nature is really wonderful.

The second is the remains of ancient buildings, highlighting the strong Taoist cultural atmosphere.

Before entering Shangguan, I saw a stone archway. On the front of the archway's eyebrow was written a plaque of "songfengshuiyue". Couplet: pure and secluded in the deep mountains, no vulgar profit, living in the fairy cave, happy and innocent. It means to live quietly in seclusion in the mountains, without worldly worries, quietly living in the fairy cave, willing to obey the true nature—— It is a concise and comprehensive expression of Taoism's pursuit of becoming immortal, transcending the secular world, not being burdened by things, and living in a quiet and immortal place.

On the back, there is a plaque of "Tao follows nature" and a couplet

Reading it, I feel the profundity of Taoism. The main idea is that human beings should abide by the laws of nature and not violate the rules of heaven. Only in this way can heaven, earth and man live in harmony, maintain balance and achieve the unity of heaven and man—— Using thimble technique and excellent language to express the profound philosophical thought of Taoism.

The two couplets reveal the essence of Taoism: Taoism follows nature, and the unity of man and nature.

Longquan Temple, a Taoist complex, was built in Yuan Dynasty.

The structure of multi echelon elevation should embody the profound Taoism, and it is necessary to climb and persist in believing in Taoism.

There is a couplet in the ancestral hall: the universe is invisible, the Tao runs through the past and the present. Ask who ever opened the chaos, the original nature of yin and Yang, and see me to rebuild heaven and earth—— Express the self-confidence of Taoism.

Not only the architectural complex is full of Taoist cultural color, but also the sound of wooden fish and bronze chimes, which sets off the unique sound of chanting scriptures, makes the whole Shangguan filled with a tranquil atmosphere.

Black Dragon Palace three into the four courtyard, lush trees, simple and elegant. The main hall is for the statue of the Dragon King and the water supply clan in the auxiliary hall. In 1966, during the cultural revolution, all the statues were destroyed. On the wall of the main hall of the Dragon Palace is the inscription of fan Chengxun, governor of Yunnan and Guizhou, who visited Heilongtan during the reign of Emperor Kangxi of the Qing Dynasty. On November 3, 2000, a large number of goldfish swam out of Heilongtan clear water pool, which was reported by Kunming news media and aroused widespread concern of the society. Heilongtan palace was restored as a historic tourist area.

It is considered by experts to be the most powerful red earth in the world except Rio de Janeiro, which is more magnificent than Brazil.

Located in a warm and humid environment, the iron in the soil is gradually oxidized and deposited, gradually forming a dazzling color.